I was very fortunate to work with the enthusiastic team of Invisible Flock in the Cost of Innovation -residency and share my passion for making art on environmentally related themes. The theme to work in the residency unfolded naturally with the focus on the interconnectedness we have with the trees. The questions that intrigued me the most paved way to two artistically different works.

How can I reach out to connect and meet the realm of the trees? 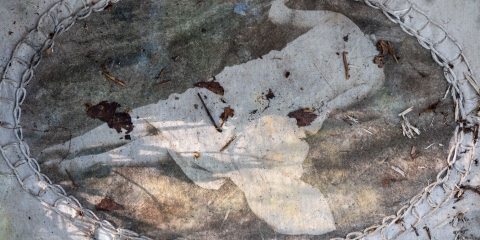 When creating the environmental bio artwork A Love letter to a tree I felt that a sense of connection was established and I was getting closer with a partly forgotten sensory memory. What living near the forest and among its multi-diverse selection of different trees as a child had imprinted in me. As a child forest was just a forest and life happened beside and inside it. In the soft and protected space of the forest entity who was holding you like a mother holds a child. You took in the smells, touches, and tastes of the forest bed and the musty earth. Heard the forest sounds on a bright summer day when the forest was a cooling shelter to lay in the arms of rustling forest bed out of reach from the beams of the sun. In touch with this bodily connection and memories, I felt that the common language was already present and I could just imagine that through A love letter to a tree my affectionate human gesture would be received and transported to the very core of the forest ecosystem.

Moments with different trees continued in The Yorkshire Sculpture Park in the studio residency period and intensified the experience of encountering trees with a variety of characters. 3D laser scanner served as my tool for capturing the portraits of the trees and getting to know their special features and dimensions. With awe, I was sensing the connection the tree had to its environment and how some of the trees seemed to wear majestic auras expanding over the multitude of other trees and the vast landscape. On the other hand, I was enchanted by the hundreds of years old yew -tree trunks emerging from the soil inside the cave formed by the branches and leaves of its own. 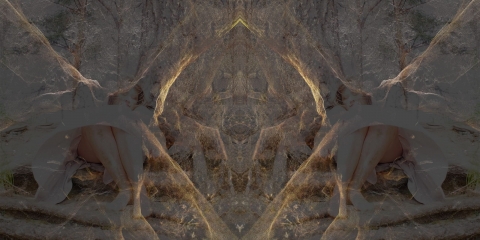 After plentiful guidance by Ben on how to handle the 3D point cloud imagery of the trees I was ready to embark on my artistic journey with a new set of tools and materials. At home the magical moments with the trees were to be processed in a 3D world of its own that I plunged in with the Unity 3D engine. With the support of remote advisory and the very fortunate possibility to work in the FrostBit software lab in my hometown, I was able to create animated camera movements in the point cloud scans and produce the “walks” inside the trees that I had visioned. With the abundance of the material in my hands, I was now able to set up an editing work consisting of the point cloud animations and the moving image material that I had filmed in the early summer of 2021 with the mover-performer Anne Niskanen. When the editing work was coming to its end I found that I had another set of questions that were best at describing the multidimensional subject of connecting with the trees and the resulted 3D -aided short film that I named Sharing skins.

The human body is seen as a vessel for human consciousness but does a tree have consciousness and where does it reside? If we want to connect with the tree do we need to see it as a bodily being or can we expand our consciousness to meet the invisible but present?

If we would interlace and layer, weave our bodies close to it, to another skin, could the vastness of the tree´s presence be touched? Could we enter the altered state, where to grow part of and become immortal like eternally shape-shifting yew -tree.*

*In Sharing skins short film various Nordic and British trees are present and some are attributed with almost mystical symbolism. Extraordinarily long-living, a poisonous yew tree with its ability to multiply and robustly resist the toughest of conditions and regenerate is a symbol for eternal life with its dual nature.

The Cost of Innovation