Development in Lockdown – A Journal piece

Development in Lockdown – A Journal piece

Two new projects have gone live over the past three months for us at the studio, both 100% digital works for mobile and web. Reflecting on tools and processes, as well as thinking about what the output of a studio who’s work more recently has been associated with physically large and demanding works has led me to do a lot of thinking about audiences, putting out work and the concept of ‘finished’.

This isn’t a deep dive and so appropriately to some of the things I’m going to be reflecting on, not all the thoughts are going to be complete. Rather this is the beginning of an attempt to post and talk more about process and where we are at with thinking and making in all its sometimes unfinished, messy, ‘all out on and in pieces on the garage floor’ stages.

The two works: Duet – an app for ios and android. It is a revisited older work where strangers around the world exchange answers to simple and esoteric questions once a day for 100 days. Out From the Flood – an interactive online experience bringing to life the vast environmental data and LiDAR scans of the forest.

Both projects are largely self initiated (Out From the Flood has received support from the Finiish Institute) and are the result of long form international relationships and partner development. Duet is an India/UK team and OFTF UK/Finland, both were made and developed in house in our Yorkshire studio. They each feel in their own way like the summation of a bunch of processes and also personal knowledge bases for me (Ben) specifically which has allowed both projects to come about quickly.

It feels good to have work out there, it’s not the work we had planned (that will hopefully be back out in 2021) but it is work and its dialogue with global audiences, people around the world doing the things we have made and it highlights some interesting thinking for the studio. Firstly the R&D of our larger installation and physical work is still ongoing, pumps are tubes are being fitted, machines and audio devices are being tested, but we have for the moment uncoupled some of our technical capacity from the rest of that ongoing work. In practice this means that I have been able to focus on technical development time and this has allowed us to create an almost entirely new wing of activity and output.

We rebuilt Duet from scratch. To say it was back by popular demand would be to oversell it slightly, but some different friends independently of each other at the beginning of lockdown said that it would be the perfect time for something like Duet. Facing down the barrel of postponements and cancellations it felt like the perfect excuse to do some work we had been putting off again and again, hoping to one day scratch some funding together and find a context in which to resurrect it. We loved the core design of the original work – a throttled conversation between strangers. On signing up you are paired with an anonymous partner and once a day the app asks you a question and your answer is sent to your partner. It’s very simple, very minimal, purposefully slow and devoid of all features other than that core exchange. The original version had paired people between India and the Uk, but as we entered this weird new normal it felt like even being a town or city apart in the same country felt like distance enough, so we opened the app out to the whole world and launched it for 100 days (there’s still 50 odd days left if you want to pick it up). I won’t unpack the app and experience too much, I’d rather save that until it’s over and do a post mortem. Reflecting on it personally however, it felt like a big turning point in my practice.

One of the things we have struggled with constantly as self taught technologists with a broad portfolio is the idea of mastery of a single platform. I have talked a lot previously about being artists not software developers, how being ‘a good artist but a bad engineer’ was more interesting to me than the other way around. This is still true to a degree but not because I enjoy having gaps in my skillset or having to spend the first few months of every project incessantly googling the syntax of whatever language or tool we are using on this project, but rather because that is just our reality. We have always let the ideas and the work drive our development and looked for the best tool to help us make the work. This has meant skipping about on platforms, often finding a plugin or library that does the thing we want and pivoting our entire work over to that platform, we have rarely had the time in the moment to take a more indepth approach.

Over the years we have worked (and still do to a degree) with Processing, Arduino, Javascript, OpenFrameworks, Adobe Director (yikes!), VVVV, Touch Designer, Unity, Pure Data, Max, Arduino, Python and countless other tools of the creative technologist playbook. In that process I felt like I personally was gaining a wide but unsatisfactorily shallow knowledge of my tools.

Both of these two past works and a few more that we have in the pipeline have been entirely built in Unity. I had run screaming from it a few years ago after we built our location art/game IYGA. The process of making it was incredibly difficult and Unity at the time was simultaneously the only tool that made that project possible but was also a nightmare to use, partly due to my own lack of skill and incorrect expectations also because of many well documented issues with Unity. I steered as clear from it as I could for a long time even though I had spent the best part of two years using it almost every day and could move fast in it and make things that worked. Partly I had hit a complexity curve and I did the opposite to what I should have done and instead of leaning into it, I ran away. The projects we undertook after that didn’t necessarily need Unity so that worked out, but I am now thinking that I missed a moment there to really focus in push through to a new level of skill.

Long story short, I’m back. Four years later. The tool has progressed immensely and my general skillbase has also. I am finding it fun and fast to work in and a really creative playground for making digital work. It has allowed us to turn around two completely different projects quickly and approach them in creative ways. But I think the main thing that has made these two processes more constructive and creative has been the way in which the tools have allowed us to approach the idea of release.

We have often been in a position of releasing digital works especially app based ones in a similar manner to a launch or an opening night. This is I think partly the product of the industry we work in. But increasingly I have come to find this such an impossible way to make work. As anyone who has made an app/game/digital experiences that requires audiences to use/play/interact/activate it knows iteration is a core part of any experience and the gap between your expectation as a designer and the reality of how audiences use what you have made is always huge (at least when I am designing something it is). This means launching with a ‘tada’ is often a fraught and anticlimactic process that does neither us, the commissioner or the audiences any favours. With Duet and Out From the Flood we were able to take a leaf out of practices more commonly employed in the indie game world, small beta test groups, ‘early access’-ish approaches and patching and updating live projects in an open and honest manner. Software bugs are not failures, they are process.

For Duet we were able to leverage community around the project and create a group of international BETA testers who helped us iterate and test the design across handsets and users. They really helped us hone in on the stuff that worked and where the gaps were in the design. Once we released we have been able to patch and update regularly (1 patch a week for the first month) to keep on top of user feedback and also to keep tweaking and iterating the live work. Out From the Flood has taken a different approach which is to be released unfinished, an approximation of the idea of Early Access, we are using it as a live platform and experiment that we will keep plugin content and interactions into over the next few months, well beyond the scope of the development period we have for it.

Like I said unfinished thoughts so I don’t want to draw any major conclusions from this, we are in a position to take this kind of approach to release and development, out of circumstance and experience I am aware it’s not a position everyone can be in. But perhaps as we have as an industry begun to think away from venues and events, we can also start to think about how we can take audiences with us into a journey of more visible digital process. Away from the magic and seeming untouchability of development and discover a richer landscape of aesthetics and ways of making that are more open. 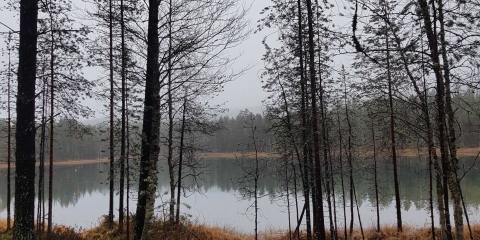 Out From The Flood